I was really unhappy with my discussion of this on my last blog entry, so I want to get a better quantitative understanding of how this would impact my house design, so I decided to write a simple 1-D explicit form finite mesh simulation which could be used to explore various wall and roof profiles. I initially intended to do this as a spreadsheet so that others could have a play with their own designs but without needing to get into code and programs, but stability issues means that the mesh size was just too small for this to be usable, so I ended up coding this up as a program.  (Save this wall-thermals_c.txt as a C file.)  The source is fully documented inline so I won’t repeat this here. It’s simple to compile and run on any system with a C compiler, e.g. Linux / Mac / Windows with MinGW. If it is useful and there is a consensus for an alternative language then I’ll port it.

If anyone is interested, then I can post some sample graphic analysis, and also reflect any comments later. But some general observations:

These are a couple of profiles for a daily 0 – 10°C external cycle. Note that I will have an external stone skin which does nothing in terms U-values, but does act as huge thermal damper of heat variations. There are significant heat flows in the walls, but the second plot show the “one sigma” for these as a function of depth in the wall. There is bugger all ripple getting through to the internal walls. (Windows have no thermal lag so if you have large areas of window in your house then this won’t be the case.) 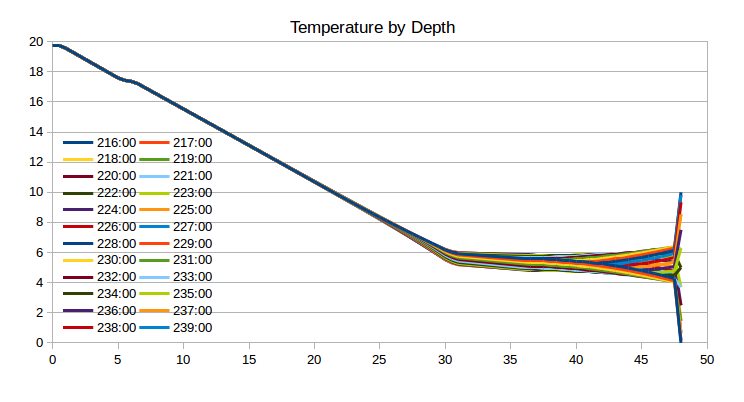 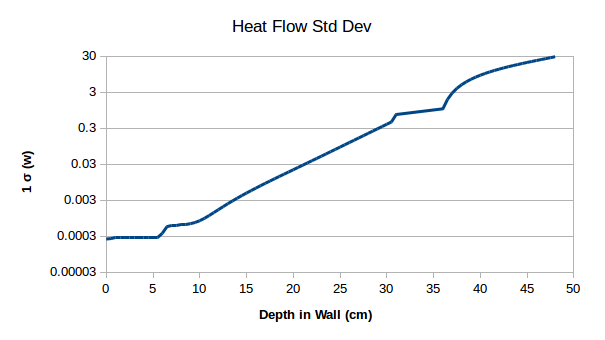 I still want to do a bit more playing to look at the effects of solar gain, etc., but anyway if you can read C (the code should be understandable to anyone who knows Fortran / Basic, etc.) or the code documentation, then have a browse and tell my what you think.

The Plot And Its Context