This is the Part II roll up of a couple of earlier blog posts and Buildhub forum topics which provide the groundwork and context.

in summary, so far into commissioning and early use, everything is at least achieving our expectations and the house might in fact perform better than my predictions.  The key design points that I listed in part I seem to be spot on.  I want to compare a figure that I gave in the modelling topic with a corresponding plot during commissioning and testing to underline this: 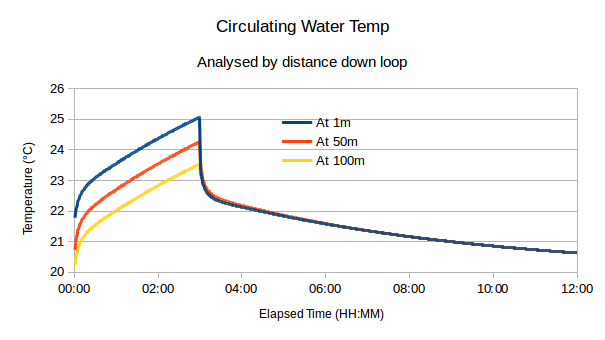 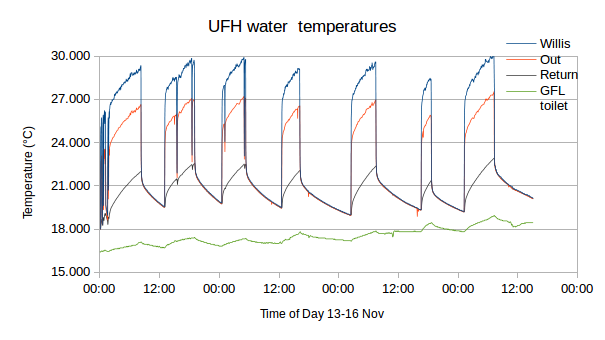 The first graph is a theoretical model based on a few simplifications, and the second live data, warts and all, and complete with hiccups as I test and restart the control system.  The bottom line is that the slab is reacting exactly as I modelled in overall behaviour, though one of the parameters is different.

However, I decided to stay with this setting because the pump is almost silent at its medium setting, and the system and its sub-components are still operating  well within specification at a delta of 5 °C.

So in my view, if you are building a house with near Passive performance (wall, and roof U values < ~0.15; windows < 1 and not too much area; well sealed warm space and MVHR; decent insulated slab), then you should expect heat losses of less than 40kWhr / day in worst winter months.  You therefore need to put roughly the same into the house.  You only need to input the net top-up, because your occupancy, normal electrical consumption and solar gains all contribute to this input; this net is going to be 1kW or less on average.  Given that a cheap and simple Willis heater can provide 3× this,  using something like a gas boiler capable of 16-20 kW is just crazy, in my view; in our case even the economic case for considering an ASHP is marginal at best.

Yes, in terms of running costs, the electricity unit cost per kW is more than that for gas, but you also have to factor in other running costs such as boiler maintenance.  In our case, the British Gas boiler maintenance contract in our old house is less than our total expected heating cost in the new house so unit price comparisons are irrelevant to us.

As I commented in the Boffin’s thread, you need to limit the heating going into the slab: one way (the one Jeremy currently uses) is to throttle back the heating rate right back (e.g. using a buffer tank and an accurate thermostatic blender) ; the other way is to use a chunking approach and simply heat the slab in one (or possibly two) chunks per day.  In the chunking case you instead limit the total heat injected into the slab per heating round (that is the integral of the power rather than the power itself).  Doing this might seem awfully complicated, but in practice you can let the slab physics do this maths for you.  You can use any moderate heating source that has a reasonably consistent but limited heat output; this could be an inline heater like a Willis heater or an ASHP with the flow temperature and rate at present set-point giving water at, say, 30°C. The slab itself slab acts as the buffer, so no additional buffer tank is needed.  The algorithm is simple:

The actual set-point (which in my house is going be around 27°C in winter) does vary by season because what you are doing is control the total heat put into the slab, and it will need trimming for any specific house and heating scenario,  but it is largely self correcting for short term temperature variations in that if the house gets a little colder due to greater heat loses in a cold snap, then the slab will require more heat to  reach the set point.

At the moment we are using a twice a day heating cycle.  This is settling down to ~6 hrs overnight during the E7 window about £1.50 and a couple of hours top up during the day (another £1).  This being said, we are still warming the house from a pre-commissioning temperature of around 13°C to a pre move-in target of 20°C as as you can see from the graph, we are currently increasing the house temperature by ~0.5°C / day on top of the sustain heat losses.

inside the heated zone of the house and

Plugging these numbers and their  Cp‘s, it takes roughly 25 KWhr to raise this fabric by 1°C, or 4 hrs of Willis Heater to raise it by ½°C.  So at the moment roughly half of the heat input is maintaining heat loses and the other half is slowly raising the temperature of the house fabric .  This maintenance heating element is less than the JSH spreadsheet estimated for current average outside temperatures.

So another way of thinking about this is that if we do without heating for a day, then the house will drop in temperature roughly ½°C to compensate for heat losses.  The daily ripple in temperature with a single heating chunk will be less than this.

If we only heat the slab during the E7 time window, say from 2 – 7AM, then the house temperature will peak roughly 3-4 hours later late morning and then fall by maybe ½°C during the rest of the day.  I feel that a ripple of ½°C will be barely noticeable to the occupants, and given that the heating during the E7 window is effectively half price, it is better to accept a midday peak (and possibly set the target temperature half a degree higher) than to pay double for an afternoon heating top-up to reduce the ripple.

Planning Approval Down, Conditions To Go