This paper describes a macroscopic characteristic of complex systems that can result in performance collapse in seemingly random and undiagnosable ways. In recent months I have had to troubleshoot Severity 1 failures on a worryingly large number of systems and services that we operate for our customers with service penalties (let alone remediation costs) reaching into seven possibly eight figures. Yet our technical teams seem to have a general ignorance of these issues, perhaps primarily because this topic is poorly documented in industry and academic treatments. Nonetheless, recognising the characteristics of this mode of failure is a key factor in both designing in its avoidance in the first place and also in the remediation of a failed system, hence my decision to take time out to write this paper.

Like it or not, a branch of mathematics is core to understanding such performance of computer systems and that is Queuing Theory. You must understand some basic aspects of this to understand how such systems behave. I happened to cover this in my university course, and then worked on a project in my early career modelling and analysing Army Command and Control Systems. Now you may think it somewhat bizarre that I mention such 1970s CCSs which involve hundreds of people talking on a bunch of radio channels when discussing the macroscopic behaviour of complex systems that could involve the interaction of thousands of computers over shared WAN infrastructure. However whilst our complex Service-Oriented Architectures (SOA) today might have time constants perhaps three orders of magnitude shorter, in terms of the models which underpin their mathematics and their macroscopic behaviours, these the systems all largely exhibit the same characteristics.

The next section of this paper provides the bare bones overview of queuing theory that you need to understand, but for those who want to delve deeper I have included a good reference as a starting point (i) for web accessible reference material for those interested, including for example a reference to Jean Yves Le Boudec’s Performance Evaluate course notes — heavy going but fascinating if you are a sad type like me. I then cover some of the real world considerations that you will need to consider in looking at major IT systems, and finally I introduce my twelve rules for attacking the analysis and remediation of such service failures.

Queuing theory is the mathematical analysis of systems designed to receive and to process a stream of requests. Central to such analysis is the realisation that we can classify and mathematically analyse many systems which involve people or requests arriving in a system, their being held or queued for a period until they can be processed, their being processed, and finally leaving the system. It applies to banks, traffic jams, and computer systems. Key characteristics include the nature and characteristics of: 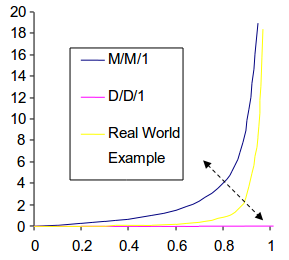 To be honest, the mathematical analysis where λ and μ have more complex distributions or where there are multiple queues, priority schemes, etc. rapidly stalls in a complex mess and you need to resort to the sorts of simulation techniques that I used on my CCS project to perform detailed system characterisations. Even so, queuing systems still have three broadly characteristics with reference to this M/M/1 case:

The vast majority of real-world queuing systems have this same macroscopic characteristic: the traffic density vs. mean service time curve has some form of knee bend. Below this as the traffic density increases, the number of requests queued N and thus the mean service time T slowly but steadily increases. After passing the knee N and T rapidly explode. How sharp the knee is and where it is actually located on the ρ range can be improved by having multiple queues, priority schemes. It is degraded by bursty distributions. If you can keep ρ to the left of the knee the system works fine, but as soon as it moves to the right of the knee service times rapidly become unacceptable, and so the system behaviour is incredible sensitive to small changes ρ around this knee.

Physical queuing systems either simple ones such as a ticket desk or complex compound systems such as a highway traffic grid are easy to observe, and we regularly witness the seemly bizarre behaviours as the equivalent ρ or λ parameters flex over time: the line outside the girls’ toilet at the theatre; the time to go down the freeway and the impact that small things like school holiday or a car breaking down on the opposite carriageway can make. We are used to delays in this physical world.

In a modern computer application / system, you can find hundreds of servers and thousands of PCs running many thousands of processes in aggregate, all in communication in a modern computer network and all exhibiting such queuing characteristics, and response to the vagaries of demand. When such systems are correctly designed, the macro characteristics of the system as a whole should be stable and the overall behaviour should be understandable as an aggregate, in the same way as a physical system. Such good systems are also usually stably self-limiting. For a good example, the designers of IBM mainframe CICS often had engineering or applied mathematics degrees and understood this stuff (or at least enough of them did). CICS applications typically exhibit the sort of behaviour where as the overall usage of the system increases, so does ρ, and internal queues start to build in the system, and hence also the mean service time. As the system response slows, this limits the user population’s ability to load the system and a stalemate is reached. This is just the same as the rides at the amusement park: there is only a fixed amount of ride-time capacity. The more people at the park, the more time they end up standing in line.

However the more complex SOAs that we implement today have indirect and often hidden shared constraints which cause coupling between the various service components: memory and I/O in each system; the LAN on each site; the WAN linking the enterprise together. Worse, as I describe later, they also respond to queue build-up in such a way as to decrease the system capacity. The net effect of this is that the mathematics of chaos theory seems appropriate to characterise such systems.

My experience across the industry when I talk to application and system developers from across our industry is that they show a woeful lack of understanding of any of this. Too many have been brought up in the world of the GUI, rapid development and infinite processing resource at their finger tips. So for the remainder of this section let me give some real-life examples that I have come across:

Again based on my experiences of across our many systems, some other specific examples of subsystems than can overload include:

Through these twenty odd points I have tried to elaborate a range of factors each one of which could account for say a 20% swing in ρ — a swing which enough to move a system from having perfectly acceptable response to one that is almost dead as far as the user experience is concerned. No matter what our executives or the customer tells you, this can and does regularly happen. Ideally the development teams should be experienced enough to avoid many of the pitfalls by design or by proper user-load testing. We should also have some defence in depth by having an effective operational capacity planning function to monitor live systems and detect potential overload before failure (but that’s a subject for another whitepaper). However both of these goals are hardly foolproof, so we will still have many systems and situations where we first become aware of the potential performance collapse when the system is already dead and the users screaming. So I lastly want to focus on are some basic ground rules for understanding how to detect and to diagnose such failures when they do occur.

This is an original work by Terry Ellison

The Anatomy and Timing of a Web Request – Part II

So why CSS Sprites?