I am writing these posts for two main reasons. The first is for my benefit, in that I find that if I have got to the point where I can explain my thinking to others, then I’ve got to grips with the problem myself. The second is that I might just help others going down this same path, by documenting my thought processes.

It’s three months since I wrote the Part I of these three Thermal Design posts, and I concluded this by saying that I intended to adopt Jeremy Harris’s UFH For A Low Temperature Slab concept. Since then I have done quite a lot of modelling to understand how the house has a system will react to changes in input and output (as discussed in my last post). Basically, the house fabric has a huge thermal inertia, so I can use average weather conditions and ignore diurnal temperature changes, and even the odd day or so of unseasonal weather. The only wild-card in the heating equation is the issue of solar gain.

Part 2 was a bit of a mixed bag which summarised these issues, and to be honest in the process of getting to grips with some of these, I ended up pretty much rewriting chunks of this and cutting out a lot. It’s take me some time to get my head around some of the secondary issues, to get to the point where I could do this post. I realised that once I approached this issue with the right mindset, then achieving this control is going to be quite straightforward. Perhaps the best place to start this is by a showing a graph of the net heat balance for my planned new house: 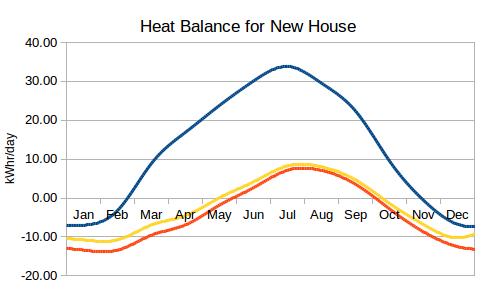 This is just a summary of the heat balance output from my spreadsheet of overall heat balance by calendar month. It shows three curves (note that this these curves now reflect poorer wall U values, a shift from 0.12 to 0.16):

So the essence of Jeremy’s and my approach is to have an actively controlled slab. By this I mean that I can to define a target temperature set point for the slab itself, as measured by a sensor in the slab, and there is an automated mechanism for adding heat and dumping heat so that it’s temperature can be automatically maintained 24×7 within a defined dead-band about that set point.

The slab temperature is coupled to the room temperature: if the temperature difference between these is ΔT and the area of the slab is A, then the heat transfer between the slab and the area is linearly dependent on these, say h.A.ΔT, where h is a constant. A good ballpark for h is 7 W/m²K. This will could vary from house to house because it is dependent on floor coverings and treatments, but it is unlikely to be outside the 5-10 W/m²K range. If I crank in the numbers for my heat balance curves and slab area, a ΔT of less than 1°C will create this range of heat transfer even in the depths of winter.

Yes we will lose heat directly into the ground through the slab, but this doesn’t directly factor into the temperature at which I need to set my slab.

This type of slab control is two sided: I need to be able to dump heat as well as add it. However, the average rates at which I need to add or dump heat are pretty low — never more than ± 0.5kW. Because the slab itself has a significant thermal capacity (~ 2kWhr per degree), I have a lot of freedom in how this heat adjustment is timed, if I am willing to tolerate a degree or so temperature variation during the day.

I am planning to use a monoblock inverter ASHP for heating broadly the same as Jeremy discusses in his topic that I referenced above. One variation to Jeremy’s solution that I am still assessing is to add an external buried ground loop as an extra controlled zone on my UFH. As the ground is varies in the range 8-12°C (depending on season) at 2m depth, dumping 400W or so from a slab at ~20°C doesn’t take a large loop size or flow rate. (I will cover these details in a separate thread.)

This is a difficult issue to get to grips with. As tried to discuss in an eBuild topic, Rfc — U F Controlled Slab + Control For A zero energy home (ZEH) on this, I can get a pretty good estimate of the average season gain for my window configuration and this is not trivial. Some (less than half) of the sunshine will end up on a ground floor and directly heat the slab. Having the slab circulation pump on (e.g. even 20 mins every hour if not otherwise heating) will effectively redistribute this heat across the entire slab, cooling the sun-facing rooms and heating the sun-shaded rooms. Once in the slab, these heat deltas will simple get factored into the overall slab control.

In terms of overall temperature control, it is the major proportion — that where the sunshine lands on other than the slab — and the heat from which then gets transferred into the room air is more problematical. However, in my case I have a simple remedy which will work for most of the year — which is to leave my MVHR set in summer bypass mode. With this, I can define a trip threshold for exhaust air temperature (say 23°C) above which, the MVHR automatically starts to bypass the heat exchanger dumping hot air and drawing in cold air. This is an automated heat dump which in my case can effectively dump up to 1.5kW in winter though a lot less in summer.

The TBD issue is whether I also factor predicted solar gains into my slab temperature offsets, and this is one that I can’t really model effectively, and (to be honest) not one where I think that I need to. I am not directly controlling the heat input into the slab, only its temperature set-point. If the air temperature does rise above the slab set-point then heat will flow into the slab from the air. My system won’t demand extra heat input (and heat that I pay for).

I want to avoid the scenario where my system is actively heating the slab at the same time as the the MVHR is in active bypass mode, but accepting a 3°C offset should effectively eliminate this situation.

High summer is going to be the period that I need to consider more. This is when I will almost certainly need to dump quite a lot of heat, but the MVHR heat dump is going to be the least effective and this is where I might need to factor solar gain into the slab setpoint, but this is a case of refinement on my real house.

I am lucky in that my house plan and orientation means that solar gain isn’t going to be a major problem for me.

Planning Approval Down, Conditions To Go

The Plot And Its Context