One of my preconditions it to provide an accurate survey of site levels across my site. The last time that I did anything like this was just under 40 years ago as a young Lt. in the Royal Engineers when I was surveying for a road, but that was using a decent theodolite to do cut and full calcs. Nowadays you typically lasers and GPS, but I didn’t want to pay a fortune for something that I could do myself, so I reverted to a variant of a technique that the Romans used and that is to use a water level. You can buy them off-the-shelf (e.g. this Handyman Faithfull Water Level 10m/33ft which looks like the first image). However, I decided to hack together my own using a couple of 18″ lengths of transparent tube, a garden hose and a couple of steel rulers and black masking tape as per the second. 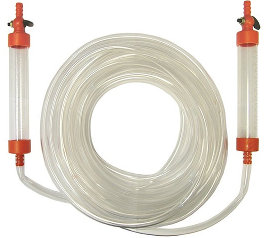 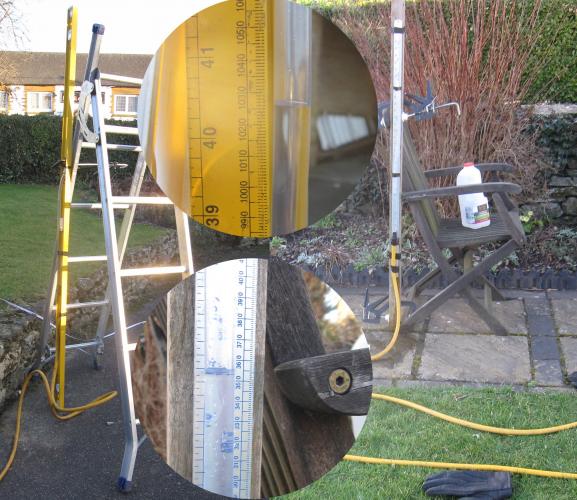 Basically the technique is to leave the chair at a reference datum level and move the ladder around the site. The bottle of water on the chair is to top up the water if any is slopped out. Occasionally, I had to shift the position of the readout tube up/down on the moveable measure (to keep the water column in the transparent section). I just entered both readings in a spreadsheet with reading 1 being the moveable readout at the datum. (This is in row 2, because the headings are in row 1.) So the height formula is just (and copied from row 2 to the rest of the rows):

Since my garden hose is about 40m long, I was able to cover my entire site from a single datum, and even where I didn’t have line-of-sight. As you can see from the inserts, it is really easy to read out the levels to 1mm accuracy, so even if I was sloppy the entries in this spreadsheet are at most a couple of mm out for the entire site.

The one thing that you do have to be careful about is to flush the full length of the hose through before you start to remove any bubbles / airlocks and more importantly to ensure that you don’t have one end of the hose at (overnight) air temperature and the other at mains water temperature, as this density gradient can cause a systematic error of a few mm.

There’s a trade-off to be made here on speed / flexibility / cost, etc. I am retired so my time is free — so long as I enjoy or at least take satisfaction in what I am doing. If I was working and my time was a constrained commodity then I’d have either gone the subcontract to specialist route or bought myself a dumpy level. But the reason for this post was that the water level method works and is amazingly accurate. It can just be a bit time consuming.

The model that I described here was my V2 approach. Using the two transparent read-out tubes each against a long rule with a decent mm scale makes things a lot easier. As does having a stable reference base (my heavy wooden chair with the readout clamped to it). Black masking tape and clamps are an alternative to bungees. The design for my stand for the movable post could be improved — the light ladder fell over a couple of times. However, making up a couple of wooden bung pegs to close the tube ends when repositioning stops unnecessary water slop — albeit at the cost of an extra to-and-fro walk to take them out and let the levels settle before taking the reading.  I also had a couple of peg sets with 5m of string between them so that I could quickly walk a grid to take level and transcribe them onto my plan.  The method was good enough for the task in hand.

However, in the end it became clear that checking site levels was going to be a regular occurrence and after the third set of measurements I gave in and bought a CST Berger 24X Dumpy level on eBay “as new” for £174 inc free delivery. Why?  The water level method is accurate but setting it up and taking measurements just takes too long.  Getting the levels just right is critical on our build, so the investment in a Dumpy was a sound one. Hopefully I will be able to sell it “very good condition; used on one project; one owner for ~£100” in a year’s time.

The time savings and extra mm accuracy of going to an equivalent laser system didn’t seem worth the significant extra costs. Still doing the water levels was fun.